WELL!  I am finally able to say  my kayak has gotten wet... other than by rain water, that is.  I'd be embarrassed to admit how long it's been since I've been kayaking.  Facebook has been a good way to meet new people with similar interests.  My new photographer friend Bill, who has a place a few towns over from me was kind enough to share an amazing location with me!  Although I've been kayaking for a few years now, this was my first time in salt water.  Even though it was a protected bay along the Maine coast, I was a bit nervous about tides & waves. After all, I'm used to ponds, lakes & calm rivers at best!

I did make sure the insurance policy on my camera gear was paid up before heading out.  (It's scary, there is a  list of "friends" who are more than willing to claim my photography equipment, should anything happen to me.  I could even say there's a waiting list!)  Lucky for me, they were all disappointed yet again.

I invited my friend Ed to go with me, since he was wanting to try out his kayak & I was new at the coastal kayaking.  It just so happens that he's also a Maine Guide who specializes in traveling water ways & rivers.  Figured it couldn't hurt to take him along... besides, he was great company!


I ventured out two days, hoping to get some photographs of harbor seals with pups.  Bill has a number of wonderful images of the seals that he's captured and he made it look so easy!  Boy, was I humbled!!  It probably doesn't help that I took my 7 pound, 500mm lens out in the kayak with me.  The seals with pups were right out on these rocks ... how hard could it be, right?  Well!  As soon as I came around with the kayak, they were off the rocks, in the water & on the move!  Do you have any idea how frustrating it is, to try to steer a kayak to photograph a seal in the water?  As soon as I would get lined up with a face in front of me & in my lens, they would dive and come up on  my side.  In a kayak, you can't hang a 7 pound lens over the side and turn to shoot without the risk of tipping over.  So... the lens had to be put down, the paddles picked up and I'd attempt to steer again.  Ed would give me subtle little whistles or signals, as they seals would pop their heads out of the water BEHIND me!  I'm completely convinced they knew what they were doing... in fact, I'm pretty sure they were laughing at me!  Although it was very frustrating, it was also a blast!  It felt so good to get out on the water and the seals were so cute & fun to watch. 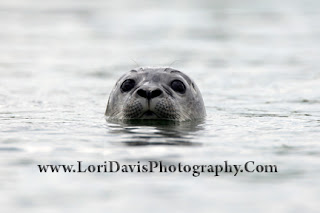 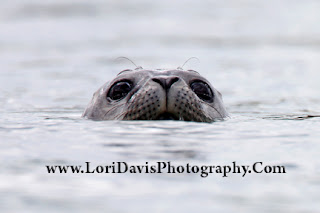 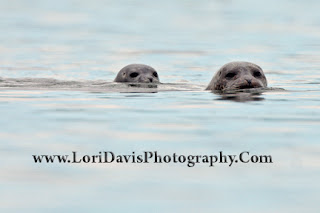 The next day I tried again, but used a different approach.  I stayed even further away from the rocks where the seals were and came way around off to their side.  That approach worked much better, however, the water was much more rough in the bay that 2nd day.  One minute I'd have a seal face in my lens.. and when I'd click the shutter, I'd end up with a picture of sky!! It was laughable!  Frustrated again, yet still had a blast!  That day, I went with my friend Gail Cleveland, an artist ( painter.)  Check out her work at Smart Studio.  While she was laughing at me out on the rough water attempting to photograph, she was also relaxing on the beach of a nearby island, creating some wonderful paintings.  She made some comment about how I looked like "Charlie Brown trying to fly a kite..." or something silly like that.  I don't think it was meant to be a compliment!

The second day did not produce seal images, however I did get some interesting bald eagle shots.  A number of them (5-6) had gathered on the rock feeding on something they'd found.  In this photograph, you will see one adult bald eagle and varying ages of immature & juvenile eagles as well.  I've never a variety like this together before.  It was really quite interesting. 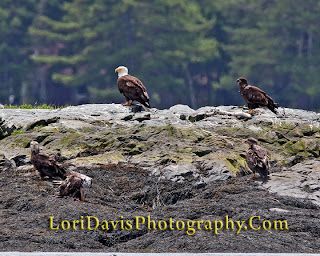 Thanks again Bill for sharing this magical spot with me!  And for Ed and yes... even Gail, for keeping me company!
Posted by Lori A. Davis, Photographer at 8:19 PM 2 comments:

The phone rang the other night, it was my friend & neighbor RJ.  He very casually asked if  "I was busy, or did I have a minute?"  I told him I could talk and his next question was "So... what do you feed a bear cub?"  Needless to say, I dropped what I was doing.  He had my full attention!  RJ is also the animal control officer for my very small town.  Typically, his calls are for roaming or misbehaving dogs.  This call was different.  Someone had told him about this little bear cub they had seen, staggering around alone.  He showed up fearing he may have to destroy the animal and instead, tossed a blanket over it and brought it home!  The cub appeared to be dehydrated, hungry and quite wobbly.  From my previous experiences w/ wildlife rehabilitation, I knew not to give it pasteurized milk, as it's little body would not be able to digest it.  Instead, Lauren (RJ's wife) gave her a little canned cat food.  Before we knew it, she was on  her 2nd little can.  They didn't want to feed her too much, as we didn't know how long she had been without food. 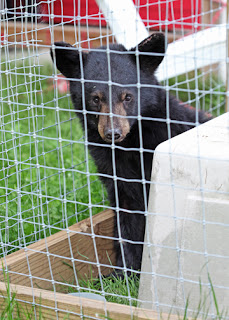 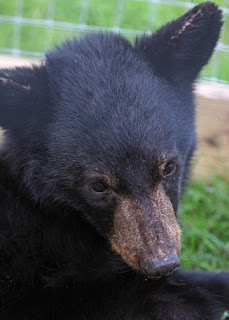 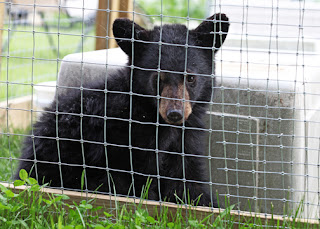 Look at this sweet face!  All you wanted to do was scoop the scared  little cub up in your arms and give her a "bear hug!".  But, she was only handled enough to move from a carrier, to this pen, then back into a carrier to be delivered to the game warden.  I hate to think of how many "photographers" would have taken this opportunity to exploit the young, sick cub and pose it for some pictures.  I can't say it didn't enter my mind, but as soon as that thought was there, it was gone again.  It was important to me, especially if the cub were to be released again, that she not be handled anymore than was necessary.  And even though it didn't seem to traumatize her too much, she was sick and scared.  And always, you need to remember that cute & cuddly or not, this is still a wild animal.  My parents taught me well!  I wish more folks would think in this manner.


I was very pleased that they thought to call me!  This was a wonderful experience!  The game warden suspected this was a 2nd year cub.  RJ has invited me to go along when they go back to the wildlife rehabilitator's place to find out more.  When he got his crate back, he was told it was a female.  Don't worry Mom, I didn't try to check myself!!  Perhaps I'll have an update before too long.

Posted by Lori A. Davis, Photographer at 1:13 PM 2 comments: